The Left Wing has reached the Ogeechee River and begins to cross at Fenn’s Bridge.  A series of sharp cavalry battles ensue in the area of Waynesboro when Sherman feints toward Augusta.  The Left Wing also provides support for Kilpatrick as he operates and clashes with Wheeler between Millen and Waynesboro.

The Right Wing occupies Oconee and have taken the abandoned lines of the Confederates at Ball’s Ferry.  The Left Wing enters Sandersville where they clash with cavalry as the enter town and fight a running skirmish through the town square.  Elements of the Left Wing move out from Sandersville and move toward Tennille and Davisboro.

The Left Wing begins to move towards Sandersville and begin to meet active Confederate resistance and begin to skirmish almost constantly as they advance. 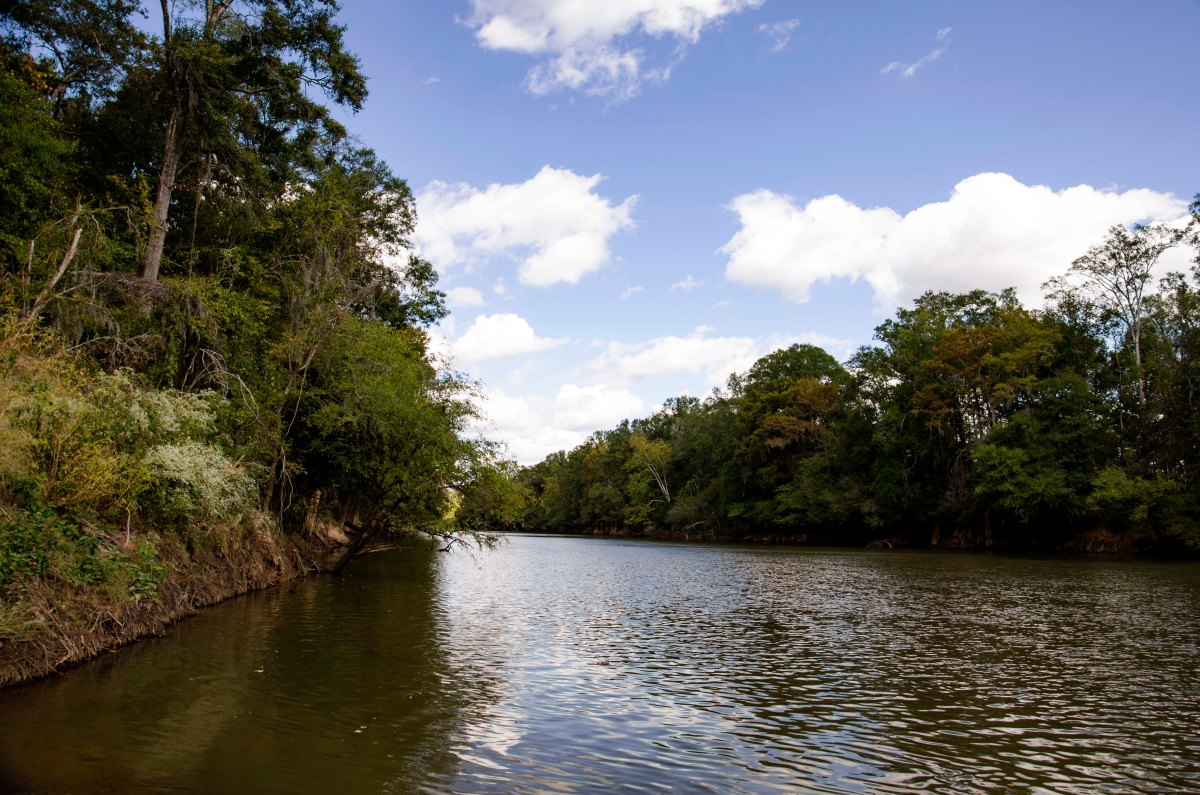 General Kilpatrick takes his cavalry column and leaves the Right Wing and feints toward Augusta with elements of the Left Wing.  General Hardee arrives at Ball’s Ferry to assess the situation.  He decides that their lines must be abandoned and they withdraw during the night.

They Left Wing begins to leave Milledgeville and moves through Hebron.

The Left Wing of Sherman’s army moves into and occupies the Georgia State Capital of Milledgeville.  At one point, soldiers occupy the state house building and hold a mock session of the legislature.  They have speeches and vote to repeal secession.  General Sherman takes the Governor’s Mansion as his headquarters.  The Governor had taken all the furnishings with him to Macon leaving the mansion empty.  Sherman slept in his bedroll on the floor.

The Right Wing reaches the Oconee River north east of Macon.  After passing through McIntyre and Toombsboro they are delayed at Ball’s Ferry by stiff Confederate resistance. 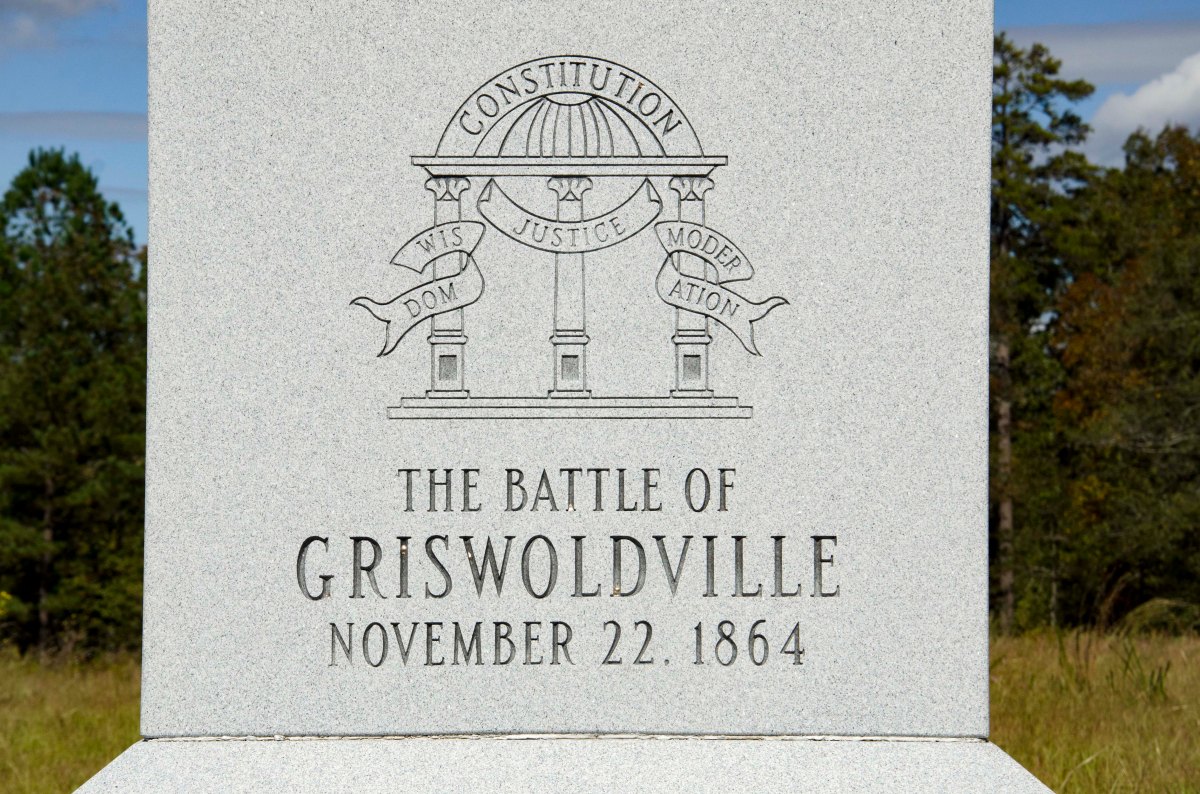 The 20th Corps, part of the Sherman’s Left Wing, reached Milledgeville.  They marched into town past unoccupied Confederate earthworks and were completely unopposed.  Mayor R.B. DeGraffenreid surrendered the town and asked for protection from looting and destruction.  Two regiments camped on the state house grounds and acted as the provost.  They also raised the first U.S. Flag over the state house since the start of the war.

The Right Wing fought what is thought to be the largest battle of The March to the Sea at the Battle of Griswoldville.  On the morning of the 22nd, General Hardee dispatched three brigades of Georgia Militia from Macon to August to help defend the city.  Hardee was hoping that the Federal column had already passed and that the militia would be moving behind them and have a clear path to August.  Weather and choked roads, along with delaying actions by Wheelers cavalry, had caused the Right Wing to slow down.  The Militia were under orders to retreat if the encountered any resistance.

General P.J. Phillips was in command of the Militia, after they marched north east from Macon they met up with the 4th Brigade that had marched out the night before.  They told Gen. Phillips about the skirmishing between Wheeler and the Federals.  Phillips also learned that his detachment outnumbered the Federals and decided to disobey his orders and attempt to overrun the Federal position.  They were to attack across open fields that were nearly 700 yards in distance and try to reach a deep ravine about 100 yards from the Federal lines.  The Federals were caught off guard by the attack as it came unexpectedly, but they quickly regrouped and formed up for a fight.

The Militia, made up of old men and young boys, made a concerted, if not confused, effort to attack the Federal position.  Many of the Militia had never seen combat, some fired on their own men by mistake, some even attacked in the wrong direction.  The battle hardened veterans of the Federal army opened up with a withering fire from their position and the bodies of the dead and dying Militia were littering the field.  Yet they still advanced, time and time again under the constant fire of the Federals.  The Militia reached within 50 yards of the Federal line before they finally retreated.  The Militia lost 51 men killed and 472 wounded.  The Federals lost 13 men and only had 79 wounded.

Parts of the Right Wing of Sherman’s army pass through Gordon and move on east to Irwinton.  Their column stretches out for miles as they choke the roads.  The Left Wing continues to move closer to Milledgeville.  Sherman remarks in his memoirs that they only made 8 miles on this hard, cold, windy day.  That night an uncommon early season snow storm blanketed the army with snow.  The southern civilians accuse the yankees of bringing the cold weather with them.

General Hardee, in command of the Confederate forces in Georgia, is in Macon where he has been preparing to defend the city.  His scouts have reported that the Federal columns have turned away from Macon and have started on a move eastward.  Hardee now realizes that the Federal objective is most likely Augusta or Savannah.  General Hardee begins to shift his troops as well as Wheeler’s cavalry to the east in an effort to slow down the Federal Advance. 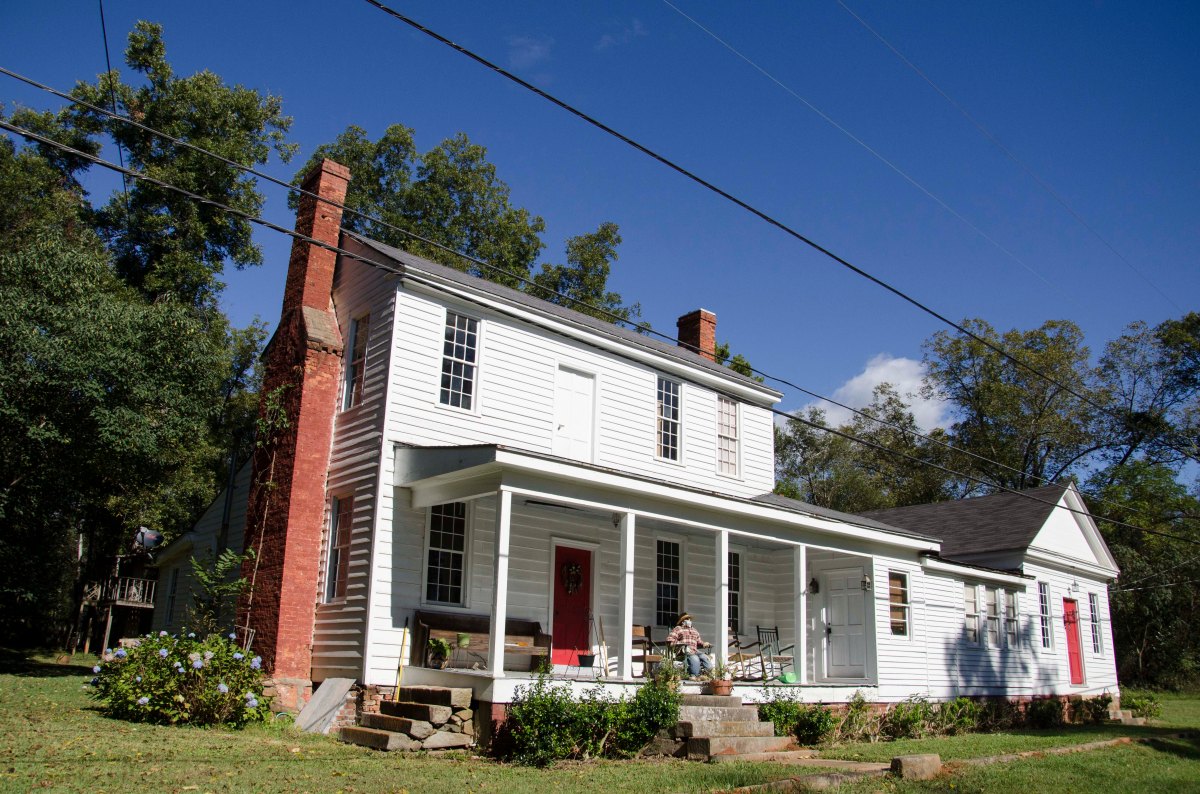 The 20th Corps, part of the Left Wing, made their way through Social Circle and Rutledge to Madison along the way they destroyed the Railroad and any thing that could be used to support the Confederate war effort.  From Madison, General Geary took a Division to Buckhead, near the Oconee River.  In Buckhead, Geary’s Division burn the Railroad Depot, 500 bales of cotton, and 5000 bushels of corn.  They also burned the Ferry and boats on the river as well as the railroad bridge that was over 400 yards in length.  General Sherman, who was traveling with the 14th Corps of the Left Wing, moved through Shady Dale and Newborn, destroying both as they were working their way towards Milledgeville.  Sherman and the 14th Corps also crossed the Alcovy River during the day. Elements of the Right Wing reach and occupy Clinton.  They camp in and around the town. 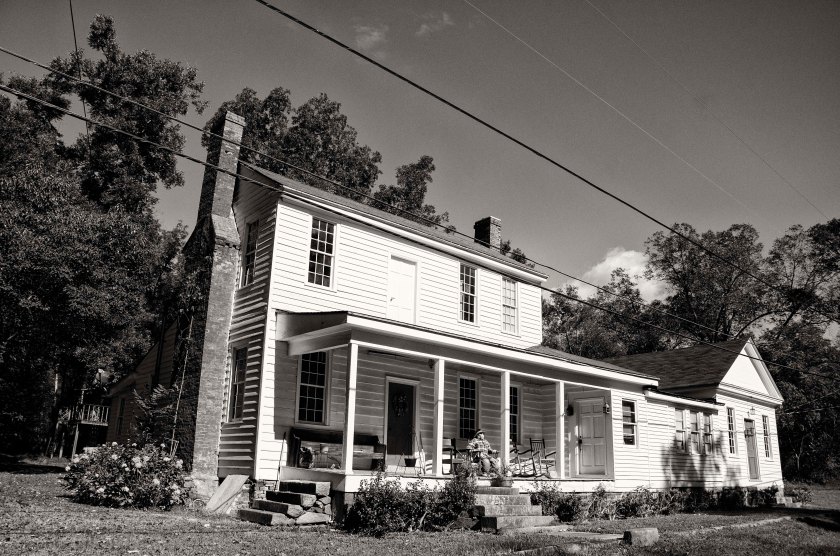 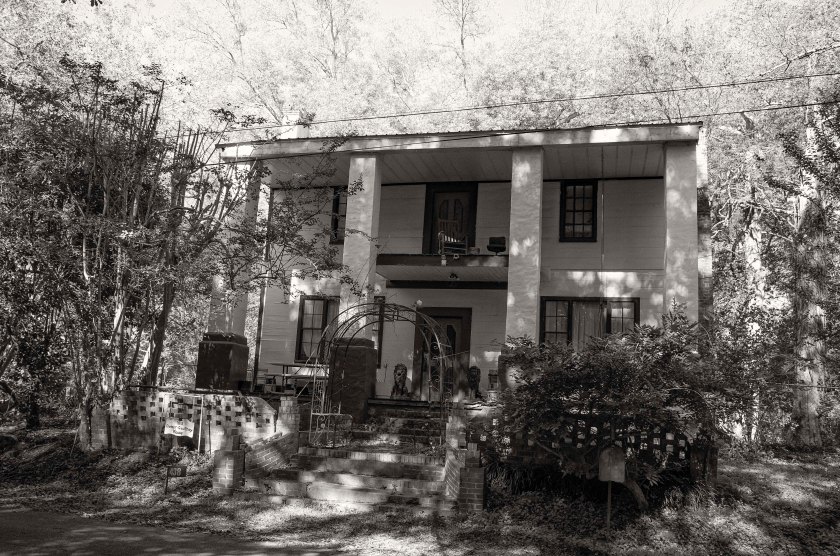 The Left Wing continues to move towards Milledgeville.  General Sherman is still traveling with the 14th Corps and they turn south from the area of Covington and move towards Milledgeville via Shady Dale.  The 20th Corps moved on Madison where they destroyed the railroad while Geary’s Division was sent to the Oconee River to destroy the bridges crossing it.  After they completed their assignments, the 20th Corps was to move south through Eatonton to link up with the 14th Corps near Milledgeville.  The Right Wing crosses the Ocmulgee River and begin moving south east.  They are working their way toward Monticello and toward Clinton, which is just north east of Macon.

The Federals process of foraging was in full swing.  The “Bummers” as they were often called, would leave the camps in the morning ahead of the main column and move out to the flanks.  Along the flanks they would visit every home and plantation and take their food and livestock.  There are many accounts of the”Bummers” also taking personal items and random keepsakes.  There are even accounts of the soldiers stealing and wearing ladies dresses.  For the most part, if there was more food than the soldiers could carry or use, they would destroy it so it would be of no use to an Confederates that may come around.  The “Bummers” stopped at Jarrell Plantation, now a state historic site, to forage and destroy what they could not carry.  They burned the cotton gin and destroyed 300 bushels of the families wheat, they stole the livestock, and wagons.  They Federal troops also freed all the slaves on the plantation. 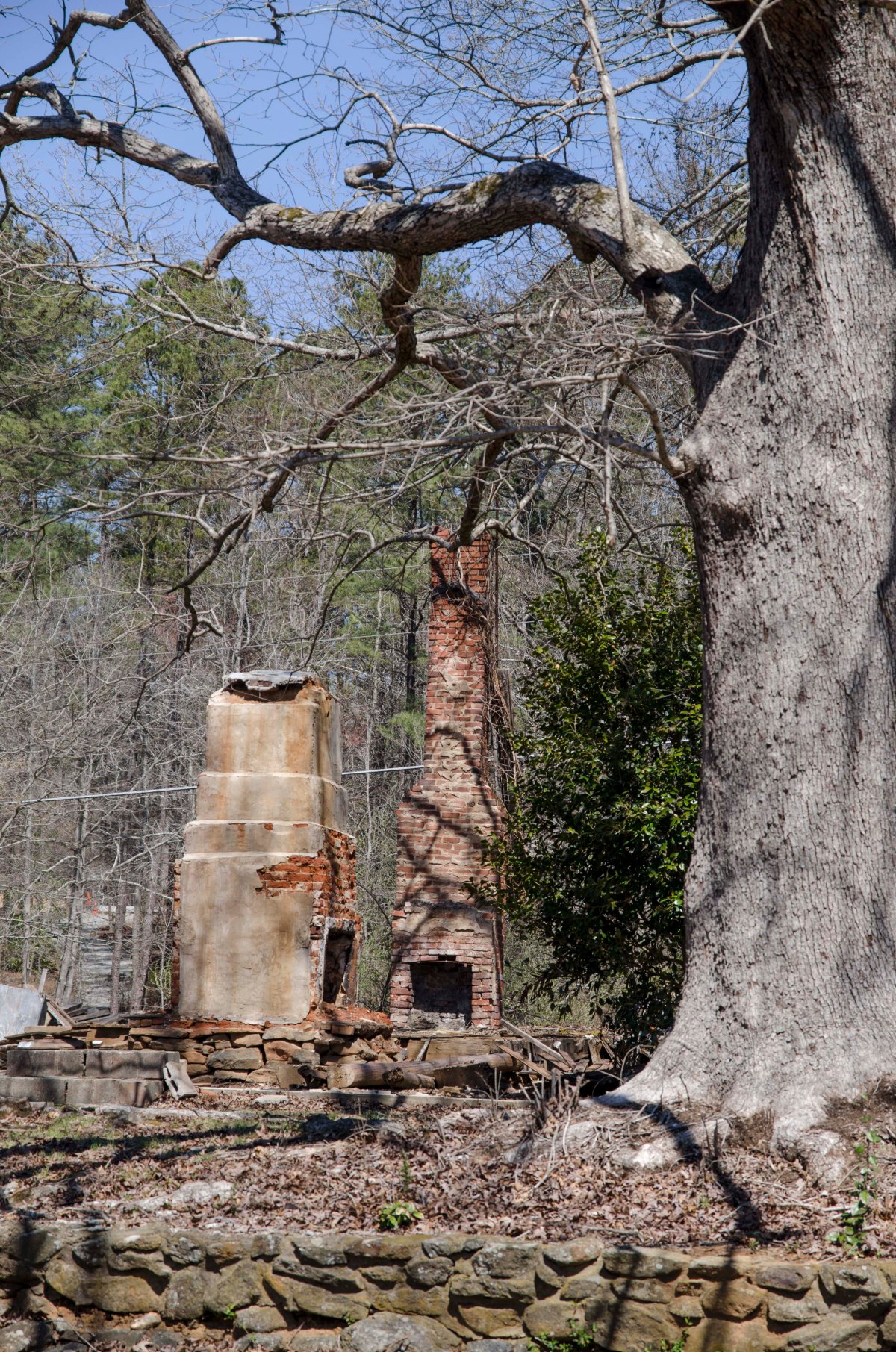 The Right Wing of Sherman’s forces continue their march south and pass through Jackson, Flovilla, Worthville, and Indian Springs.  General Howard’s forces camped for the night near Jackson and prepared to cross the Ocmulgee River on the following day at Planter’s Ferry in the area known as Seven Islands.

The Left Wing, accompanied by General Sherman, moves through Conyers, Covington, and Social Circle while also crossing the Alcovy River.  While in Covington, the Federal Troops march through the town with their flags waving and their bands playing.  They are greeted with much trepidation from the southerns, but the slaves were joyous in their arrival and began to sing, dance and pray.  They crowed around General Sherman on his horse in great celebration.  Sherman camped for the night by the Ulcofauhachee River about four miles east of Covington.  Here, Sherman met an elderly slave and engaged him in conversation.  He asked the old man to spread the word to others to not follow the army as it would hamper their movements and burden them with more mouths to feed and people to care for.  He also said that the army would hire young and strong men to work for the army along the way as pioneers and some as teamsters and cooks.  Sherman told the old man he would not be successful in his mission if he was encumbered by masses of freed slaves as he attempted to move through the country and fight the Confederates.  The old man agreed and began to spread the word.  During the March to the Sea, many freed slaves did follow the army, but not nearly as many as could have.

On this day, Confederate President Jefferson Davis, appointed General William Hardee to command all the Confederate forces in Georgia.  Confederate Cavalry General Joseph Wheeler had made his Headquarters in Griffin and on the 17th, he ordered his men to place pickets on all the roads to Macon, Columbus and Augusta.  Wheeler and his men were to harass and slowdown Sherman’s Army as much as possible.

On the morning of the 17th, the Federal Cavalry under the command of General Kilpatrick, moved from Hampton towards Griffin and Forsyth.  The threat was really a feint to distract Wheeler, but was enough of a threat to cause Wheeler to burn the bridge over the Towaliga River and start a small firefight.