The Federal troops continue to chase the Confederates and soon, as they approached Smyrna, they begin to encounter resistance from Confederate Skirmishers.  They were pushed back to their main lines and the Federals began to entrench.  Elements of Howard’s and Palmer’s Corps of the Army of the Cumberland advanced on the portion of the Confederate Smyrna Line near Smyrna Camp Ground, roughly the center of the Confederate line.  They were engaging seasoned troops of Cleburne’s Division and suffered heavy losses.  The second portion of the attack was made by Dodge’s Corps of the Army of the Ohio, they attacked the Confederate Left near Ruff’s Mill.  There was a salient in the Confederate line near this point that was their target.  This is where Hood’s and Hardee’s Corps met.  Elements of Dodge’s Corps pushed the skirmishers of Stevenson’s Division out of their rifle pits and back to their main works, but suffered heavy losses during the assault.  These attacks gained no ground for the Federals and only confirmed that the Confederate army was still in the line enforce.

The main Federal advantage gained this day, was Blair’s Corps being able to work its way around and behind the Confederate left flank.  At that point they were closer to Atlanta than the main body of the Confederate Army.  Blair’s movement seriously threatened Johnston and in the late night hours of July 4th and early morning hours of July 5th, Johnston fell back from the Smyrna Line to the last line of defense west of the Chattahoochee River, known at Johnston’s River Line.

General Sherman entered Marietta and established his headquarters in the Kennesaw House and ordered his forces to continue the pursuit of the Confederates and attempt to engage them no matter what the cost of men and material.  They must press their advantage while the Confederates are retreating.

The Kennesaw House saw many uses during the war.  Early in the war, Andrews and a few of conspirators, stayed here the night before they stole a train attempted to destroy the railroad that was supplying the Confederate Army.  It was also used as a hospital at one point as well as a Sherman’s Headquarters.  Now it is a museum well worth the visit.

During the attack on Kennesaw Mountain the Federals set an artillery battery containing 24 guns in total.  It was located on a low rise near the base of Big Kennesaw Mountain.  These images are from the 24 gun battery which is protected by the National Park. 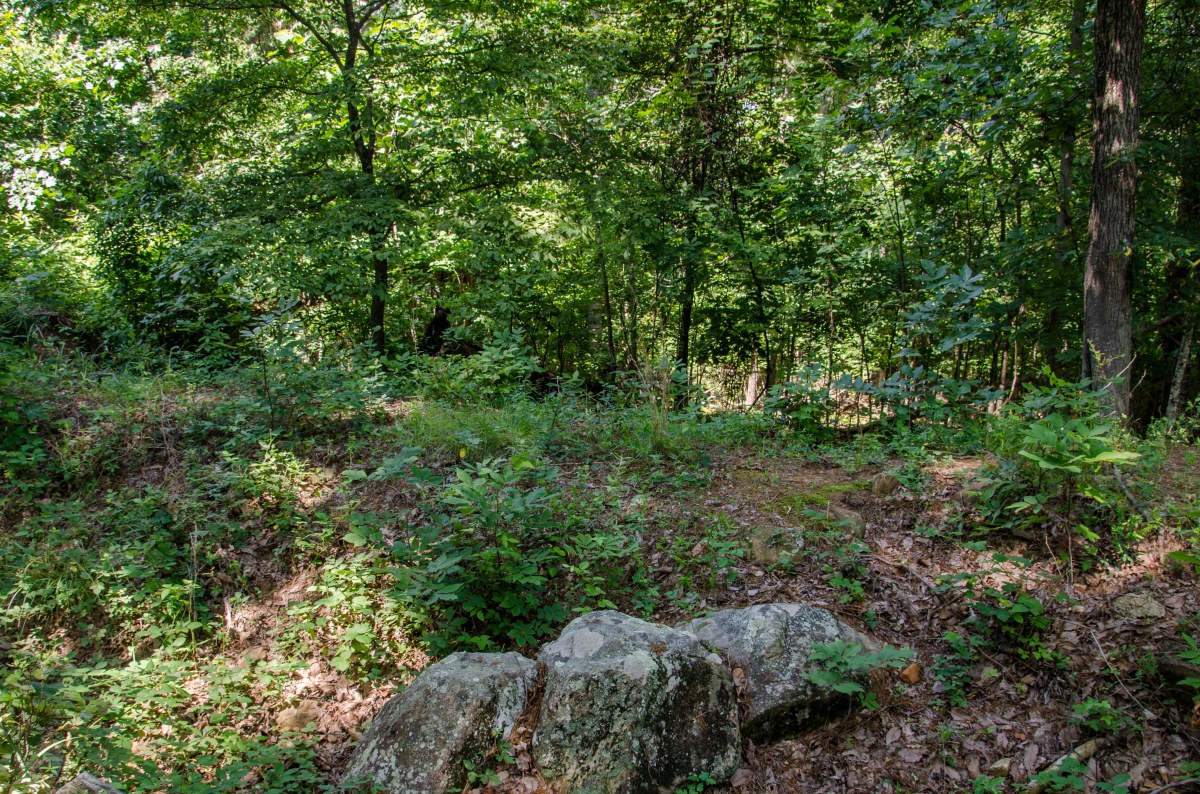 With so many locations in connection with the battlefield at Kennesaw Mountain, I am going to make several more post over the next few days with more images.  There were just too many to include in yesterdays post.  Today’s images will focus on Pigeon Hill.

On the morning of June 27th, Federals under the command of General McPherson attacked the Confederate line in the area of Pigeon Hill and Little Kennesaw north east of Cheatham’s Hill.  The Federals quickly overran some Confederate pickets and rifle pits located ahead of the main line, but were quickly stalled by the well entrenched Confederates of French’s Division, which held Little Kennesaw and Pigeon Hill.  The Confederates well entrenched with plenty of large boulders and rocks used as cover in their earthworks.  At one point the Confederates were even rolling boulders and large down on the attacking Federals.  French’s Division also held the advantage of the higher ground thus forcing the Federals to attack up steep inclines that had been heavily covered with entanglements by the men of French’s Division.  The attacking Federals were repulsed and forced to retreat to low valley between Little Kennesaw and Pigeon Hill where they were trapped by musket and cannon fire for hours.  They were finally able to retreat back to their lines after darkness fell upon the battlefield.

The battle of Kennesaw Mountain was really an extended operation that lasted for several days before and after the 27th.  Troops were under small arms and cannon fire daily, the 27th was day of the main Federal Assault at Cheatham’s Hill, also known as the Dead Angle, as well as the area of Pigeon Hill and the remainder of the Federal left.  After days of a stalemate, General Sherman was frustrated and ordered a frontal assault on the Confederate Lines.  The attack was to begin at 8:00am on the 27th, but was delayed for nearly an hour.  Their goal was to break the Confederate line at what they thought was the weakest point.  They chose Cheatham’s Hill due the salient in the line.  General Sherman ordered General McPherson to use his Army of the Tennessee to attack the right of the Confederate line as a diversion to the main assault.  McPherson’s diversionary attack was carried out against Big Kennesaw, Little Kennesaw, and Pigeon Hill.  General Schofield, who was still positioned astride the Powder Springs Road near Kolb’s Farm, was ordered to keep extending the Federal right flank in an attempt to reach the end of the Confederate lines and turn their flank.  General Thomas and his Army of the Cumberland were positioned in the center of the Federal lines.

The main Federal assault was carried out by elements of Palmer’s XIV Corps and Howard’s IV Corps.  They were attacking the salient angle that was manned by Cheatham and Cleburne of Hardee’s Corps.  The Confederates were outnumbered, but were behind a strong line of works.  The Federal troops took a beating and at one point on the hill, there was a dead spot.  The Southern soldiers could not fire upon this spot due to the position of their works and the angle of the hill.  The Union troops in this spot began to dig in with their bayonets, tin cups and dinner plates.  They were only about 25 to 30 yards from their objective.  During the night, shovels and picks were brought up to facilitate easier digging and an attempt to tunnel into the hill and under the Confederate works was made.  The plan was to pack it with powder and blow up the works, but the tunnel was abandoned after only making it about half way to the Confederate line.

Federal losses were just over 3,000 and the Confederate losses were about 1000.  This was a tactical defeat for the Federal Army, but Schofield eventually made it to the end of the Confederate line and began moving to flank General Johnston.  This forced Johnston to withdraw from his lines at Kennesaw Mountain and towards the Chattahoochee.  There are many stories of Gallantry, Bravery, and Humanitarian acts during the battle.  The stories and accounts from the diaries of the men who fought and died here make for excellent reading and paint an vivid picture of what happened here.

With this battlefield being pretty well preserved I have a significant number of images to share.  This post will contain images from the area of Cheatham’s Hill and tomorrow I will post a few images from Pigeon Hill.

On orders from General Sherman, General Schofield’s Army of the Ohio, was advancing down the Powder Springs Road in the direction of Marietta.  Schofield was attempting to go around the left end of the Confederate flank.  General Johnston recognized this threat and on the 21st he sent Hood from his right flank to the left in an attempt to neutralize the threat.  In the late afternoon of the 22nd, Hood’s Corps met Schofied’s Army of the Ohio near the Kolb Farm.  Hood initiated an attack without permission from his commander, General Johnston, and he did not bother to do any reconnaissance of the terrain or the force he was engaging.  He unknowingly ordered an advance on a superior enemy force that was entrenched on the high ground.  After suffering about 1000 casualties, Hood retreated and dug in.  He was successful in stopping Schofield from turning the Confederate left flank, but was foolish in making his assault.

Heavy fighting happened today around the Latimer Farm portion of the Brushy Mountain – Mud Creek Line.  The Marietta Country Club now sits on the former site of the Latimer Farm.  The Confederate lines around the Latimer Farm formed a Salient angle, often called Hardee’s Salient, it was vulnerable to enfilading fire.  Confederate positions were under near constant bombardment from Federal artillery positions no more than 1200 yards away.  Three Federal Divisions, under the command of General Thomas, attacked the three Confederate Brigades at the Salient. The Union troops pushed the Confederate skirmishers back to their main lines and Federal troops soon occupied a trench line in front of the Salient.  Once this line was occupied by the Federal troops, General Johnston realized the chances of the being overrun were high.  On the night of the 18th, he ordered the evacuation of the line and the Confederate line then moved back to the famous Kennesaw Mountain Line.

Heavy skirmishing continued along the Lost Mountain, Mud Creek, Brushy Mountain Line.  Heavy engagements happened in the area of Latimer’s Farm, now the Marietta Country Club.  Calvary actions were also happening continuously on both flanks.  General Johnston begins planning to move to his next defensive position at Kennesaw Mountain.  General Sherman, who has become frustrated, begins to contemplate a direct assault on the Confederate lines as opposed to a flanking movement. 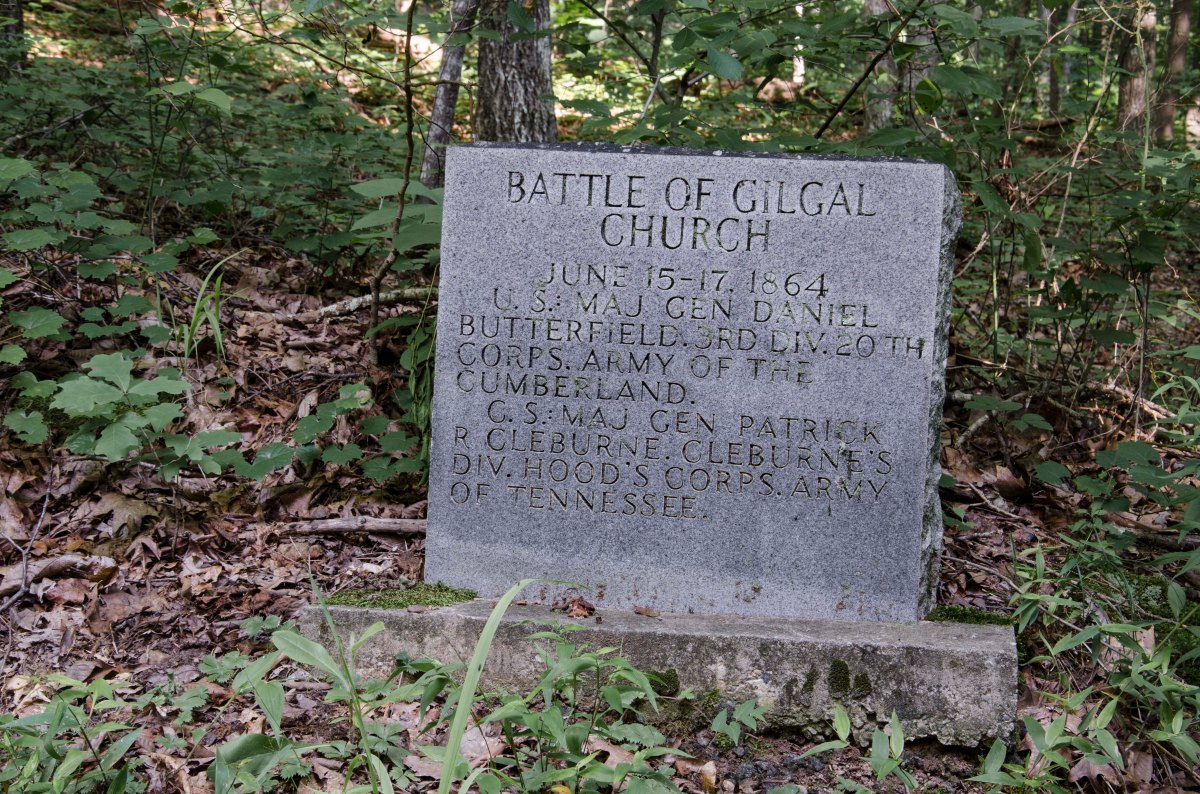 After the fighting at Gilgal Church on the 15th and continued fighting on the 16th, the Union Army has figured out that lines in the area form a salient and begin to pour in enfilading fire on the Confederates.  Other Union forces move against the thin line of southern soldiers west of Gilgal Church towards Lost Mountain.  Schofield’s XXIII Corps is now in a position to turn Johnston’s left flank, Schofield may or may not realize that he is in such an advantageous position, but Johnston does and orders Hardee’s Corp to pull back at dark, to the far side of Mud Creek and establish a new line.  During this retrograde movement, a Union artillery shell explodes near Brigadier General Lucius Polk.  He is the nephew of Lt. Gen. Leonidas Polk and only two days after the death of his Uncle, Lucius Polk is wounded and loses his leg.

Being concerned that the position of Bate’s Division on Pine Mountain was quickly becoming compromised, Confederate Generals Johnston, Polk and Hardee, rode to the top of the mountain on the morning of the 14th.  As the Generals were inspecting the position, they were observed by members of a Federal artillery battery located about a mile to the north east of the mountain.  This was the 5th Indiana Battery.  They observed what appeared to be officers on the mountain and opened fire.  The first round buried it’s self in the parapet of the Confederate position and the second round struck General Leonidas Polk in the chest killing him instantly.  Polk, also called the Bishop General was the Episcopal Bishop of Louisiana and was greatly revered by his men.  His death struck a serious blow to the Confederacy.

Later on the 14th, Federal forces attacked Pine Mountain in an attempt to cut it off from the main Brushy Mountain Lost Mountain line.  Pine Mountain formed a salient in the Confederate lines and was just over a mile to the north of the main line.  The Federals pushed hard to cut Pine Mountain off from their main line, but were repeatedly repulsed by the well entrenched and fortified positions of the Confederates of Bate’s Division.  General Johnston ordered Bate’s Division to with draw from the position on the night of the 14th under the cover of darkness. 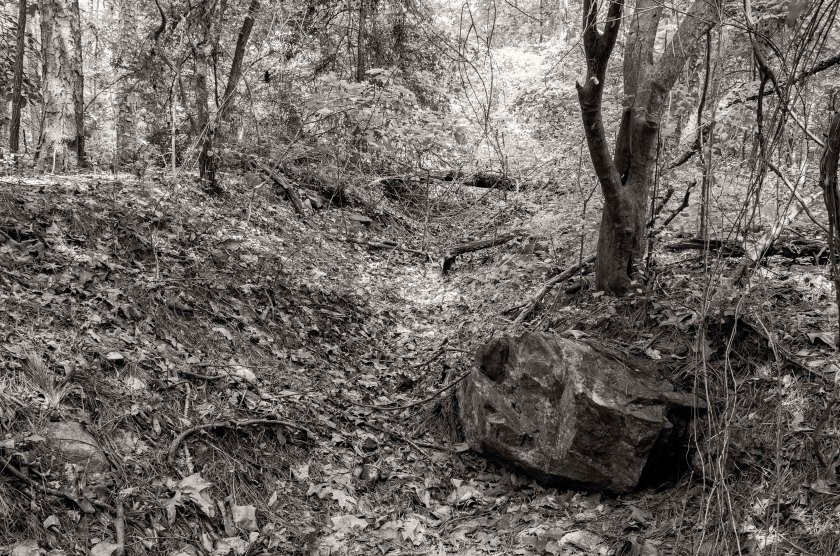 Surviving Confederate earthworks of Bate’s Division where they repulsed the Federal attack on June 14th along the base and slopes of Pine Mountain.

Surviving Confederate earthworks of Bate’s Division where they repulsed the Federal attack on June 14th along the base and slopes of Pine Mountain.